Places to Visit in Rajasthan 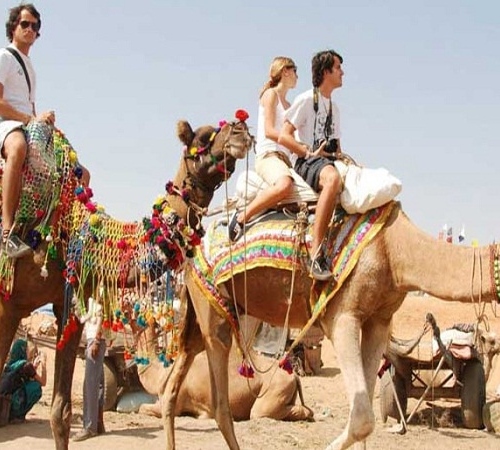 For those who want to travel in North India, visiting Rajasthan is almost mandatory. We leave you here Top Tourist Places to Visit in Rajasthan.

Jaipur is the capital of Rajasthan and the gateway of most tourists visiting this Indian state. Modern and grand city in the historic center of Jaipur and popular as  “Pink City”, colorful bazaars abound with spices, saris, sandals and leather objects, jewelery, gemstones and trinkets that make the delights of the visitors more consumerists. Losing oneself in the bazaars is part of any trip to Jaipur but the city has much more to offer such as the City Palace, the Mahal Dinner (astronomical observatory) or the Water Palace a few miles from the center.

At 11 km from Jaipur lies Amber with its imposing and masterful fort. This fortress palace was the seat of the capital of Rajasthan until the eighteenth century until it passed to Jaipur but Amber never lost connections with the nobility of Rajasthan. In addition to the magnificent fortress palace, full of ornate doors, temples and halls, there is more to see in Amber such as the fort of the city and its beautiful gardens in the Kesar Kyari Bagh.

One of the most charming cities in Rajasthan, Jaisalmer is the gateway to discover and explore the Thar Desert. The fortified old town is full of palaces, havelis, temples and small bazaars – Once an important interposition on the Opium Caravan Route of Silk and Spices, Jaisalmer survived looters, sovereigns and political upheavals. Surrounded by desert, the Jaisalmer fort is one of the most beautiful in Rajasthan but there is more to see such as the Manik Chow Market, Badal Vilas Palace, Gadisagar Lake, and some beautiful havelis scattered throughout the city.

One of the best experiences you can have in Rajasthan is exploring the Thar Desert. A desert, camel or jeep tour is easy to organize from either Jaisalmer or Bikaner. The idea is to spend a night in the desert, enjoying the starry night and the kindness of the population that lives there in small villages.

The magnificent Mehrangarh fort dominates the city of Jodhpur – the Blue City and one of the most beautiful in Rajasthan. The Mehrangarh Fort has plenty of reasons to take you for almost a day’s sightseeing but the city has much more to offer than the fervent bazaars, especially the Sadar Bazaar, Jaswant Thada Marble Memorial, Umaid Bhavan Palace, now a hotel and where you can spend the night. It is a beautiful city to discover the streets and life of Rajasthan.

Chittorgarh is a walled city with a strong historical presence in every corner and nook of its fort. Imposing, the fortress is overlooking the city, dominating in the distance the surrounding plateau. Inside the fortress of Chittorgarh, there are Jain and Hindu temples, ruined palaces, water reservoirs and beautifully carved towers.

10 Essential Destinations To Visit In Rajasthan

India is a very broad and diverse, full of regions with their own identity country and one of them is the Rajasthan – the region northwest of the country that long ago was land of the Maharajas. Rajasthan is the land where the great lords and clans fought for Demonstrate its power with opulent palaces in the center of its walled cities.

Rajasthan is a region that is worth visiting to get to know its history and architecture, its culture and its traditions or its varied cuisine. Also you can experience the royalty in this state with luxury trains. Maharaja Express, Palace on Wheels and Deccan Odyssey Train are the world renowned luxury trains in India. All of them perfect ingredients to enjoy a unique experience.

Jaipur, the capital of the Rajasthan region and known as the pink city, has the chaos of any large city in the country but also gives us two unique places The Jal Mahal and the Jantar Mantar.

The first is a palace that was part of the palace of the city and served as the chamber of women, from which real women could see through its more than 900 windows the life of the city without being seen.

The Jantar Mantar is an enclosure filled with huge astrological instruments to study the stars. There are a lot of curious constructions to determine for example the time of day, the position of the celestial bodies, the elevation, the azimuth, etc. It has the largest solar clock we have ever seen, 27 meters high, which can be seen in detail until the second hand with an accuracy of two seconds of error.

The fort of Amber is a marvel that you can visit from Jaipur itself. A huge fort on top of a hill where between passages, stairs and snake charmers the rooms where the Maharaja enjoyed his luxurious life are happening. The public hearing room, the private audience room or the mirror room are some examples.

Jaisalmer is like a mirage in the middle of the desert, a huge golden sandstone fort rising between arid lands. Its fort is the only one that remains inhabited by all of Rajasthan, and in it there are plenty of beautiful palaces and temples, guesthouses, restaurants and souvenir shops.

The so-called Blue City of Rajasthan features another of the region’s imposing forts, the Mehrangarh Fort located on top of a mountain that must measure more than 100 meters and is one of the largest in all of Rajasthan. Legend has it that he had the bravest warriors and that in one of the battles, faced with the imminent defeat, they decided to take their own lives by penetrating their chests with their daggers. His women, all of them very loyal to their brave men, accompanied this dressing with their best clothes and throwing themselves to the bonfire in which they were incinerated.

You cannot miss this Jain temple halfway between Jodhpur and Udaipur. Among this lush nature, this complex of white temples rises. The main temple is the Chaumukha Mandir, which is translated as the temple of the four faces and is dedicated to Adhinath. This temple has more than 20 rooms and about 80 domes and is composed of more than 1400 columns all recorded in a unique way, none is the same as another.

Tourists can only enter from 12 in the morning, because before it is only for followers of this religion.

Very close to Ranakpur is this ancient place. A wonderful and remote fort located at about 1000 meters high that I can assure you was one of the most romantic of the entire trip. Its endless walls of more than 35 meters high, make you enter a perfectly preserved complex. The visit can last about 1 hour and the price around 100 rupees. Another interesting point of this fort is that it houses more than 300 temples in different conservation states scattered throughout the area.

Pushkar is another city that we recommend and as Udaipur, the city rises around a lake. Pushkar translates as “the blue lotus” and its lake is the most sacred in all of India. According to the legend this lake was created when Brahma dropped a lotus flower to the ground. It is surrounded by Ghats and palaces, which give it the appearance of a Benares in miniature.

On the shores of the lake there is a temple dedicated to Brahma. They say that this temple was built as a result of a curse of Saraswati, the consort of Brahma. He is one of the few in all India to venerate this divinity since not all people are happy with him, well … rather they are somewhat angry because Brahma married his sister and incest does not like it.

The havelis are also typical of this region. These are palace-houses owned by the wealthy former merchants of Rajasthan. In Bikaner there are a few worth visiting. Bikaner also has another huge fort, although less spectacular than the rest of those that we have shown you, and something curious is that in one of its salons there are collector cars and even a biplane plane that the British government gave to the Maharaja after the second World War.

Near Bikaner is this curious temple inhabited by hundreds of rats. The legend behind these rats is that Karni Mata, incarnation of the durga goddess, asked the god of death to give life back to his drowned son. He refused so Karni Mata decreed that all members of his family would be reincarnated as rats. The Karni Mata temple does not stop entering and leaving people, from surrounding villages since they have the belief that their ancestors have been reincarnated in these rats.

And this is just a small sample of India and Rajasthan, much more information about experience of Incredible India visit blog.travelogyindia.es