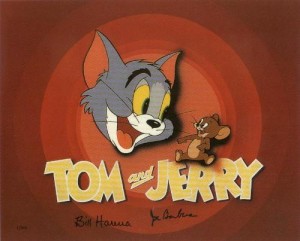 Know the unique features of Tom and Jerry games

Tom and Jerry is one of the most popular cartoon shows and luckily for you they now have their very own range of games. This article will delve into the games available and reveal some of the unique features of the Tom and Jerry games.

The first game mentioned in this article is the ever popular Tom and Jerry Food Fight. In this game you act as Jerry and you have to outwit Tom in a food fight. You use your keys to move around and pick up cheese and other bonus items, such as hearts which represent extra life. Nevertheless, you need to avoid Tom and his other mean cat friends, as well as any dangerous platforms, such as fire on the stove. However, you can also put Tom in danger by turning on the switches for the cookers. What’s more, you can use the cakes as platforms to make your way around more efficiently.

In Cat-A-Pult you will also play as Jerry. It is your job to fire cheese at the shelves in order to make the objects placed smash on to the floor. Why? To get Tom in trouble of course!

Tom and Jerry Refridger-Raiders is another exciting game option out of the Tom and Jerry games available. In this game you can play as either Tom or Jerry, the choice is yours. If you play as Tom then it is your job to throw water balloons at Jerry and his friend Nibbles as they run across the clothing line to stop them from escaping with food from the refrigerator. If you choose to play as Jerry then you have to drop food to Nibbles without being hit by Tom.

In What’s the Catch? you can also decide whether to play as Tom or Jerry. If you decide to play as Tom then you will have to catch as many plates and glasses in order to avoid them smashing. If you play as Jerry then you need to jump over the playing blocks whilst Tom tries to catch you, however catch the cheese and you’ll get some bonus points!

Another fantastic game which you can play is The Great Cheese Chase. In this game you will play as Jerry and you need to run away from Tom. However, whilst doing so you need to collect enough cheese to ensure that the cheese-o-meter is full. As once you do so, you will have enough energy available to break back into your boarded up hole.

The final game mentioned in this article is a traditional colouring in game. You are provided with a great picture of Tom and Jerry which you can colour in with a choice of ten different colours.

So there you have; six fantastic Tom and Jerry games which are available. Each game is unique and possesses a whole host of fun. I wonder which one will be your favourite…