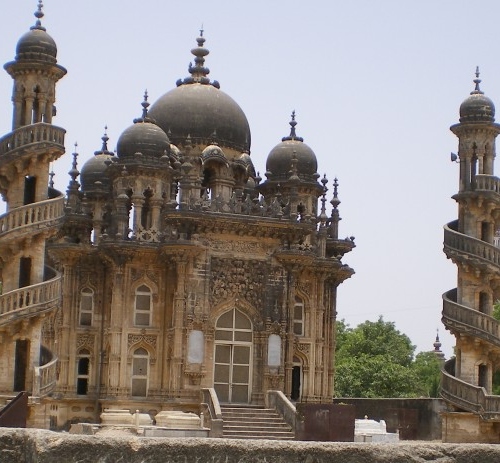 The impressive collections of Sultanate period structures are Ahmedabad’s attractions. The river Sabarmati makes the city a picturesque one. Home to Gandhi’s Sabarmati Ashram, Ahmedabad offers culinary Gujarati foods, colourful and bright Gujarati prints and the famous Garba dance. Ahmedabad presents a bagful of enjoyment to all the visitors.

The city is named after Ahmed Shah I, the second Sultan of the Gujarat. According to early legend, Ahmed Shah decided to build this city his capital after he saw a dog being chased by a hare. He began to build the city and named after himself. Slowly and steadily the city filled with buildings especially on the eastern banks of river Sabarmati. The city not only beholds some famous Hindu and Islamic architectural structure but also few theatres of the country. It is difficult to describe the charm of Ahmedabad in words. Besides, being an industrial hub, it celebrates one of the most famous, colourful and grand dance festival Dandiya, during Navratris.

The modern city is equally divided by Sabarmati river and now there are several hotels in Ahmedabad to accommodates the visitors. The bridge across the river was built during the British era. The western bank of the river is the modern centre which developed during that period. The surroundings of the old city became the heart of Ahmedabad and it still plays an important part in the state’s economy. To the south of the city, the countryside and villages are now turned into the modern areas.

Well, the historical remains are scattered throughout the old and modern areas of the city. Bhadra Fort, built in 1411, the towers and the gateways are the Ahmedabad’s old buildings. Inside, you will find Ahmed Shah Mosque which is one of the oldest mosques of the city and this was the private place for prayer for Ahmed Shah only. Sidi Sayyid Mosque, on the north of Bhadra Fort, is one of the beautiful pieces of Islamic art. Jama Masjid, Tomb of Ahmed Shah, Rani ka Hujra. Towards North of the old city-Calico Museum, Shahi Bagh Palace. Towards East- Dada Hari step-well, Sidi Bashir Minars, Bibi ki Masjid. Towards South- Qutb Alam Mausoleum, Kankariya Lake and towards the West of the old city, the modern districts. These are all well-known monuments and places to explore in Ahmedabad.

Winters are the best time to be here. Well, you can also plan a tour during Navaratri to celebrate Dandiya festival. However, Ahmedabad and the whole state is always very colourful. The typical items and the essence are well-preserved throughout the region. It is always recommended to book room while visiting during the peak season. You can check from 5 star hotels in Ahmedabad for more details. Nestled in the heart of Gujarat, Ahmedabad offers a memorable journey to the travellers.

Reaching the city is not a difficult task. Sardar Vallabhbhai Patel Airport serves the city. Both domestic and international flights are scheduled accordingly. Ahmedabad has its own railway station which is also known as Kalupur Station and it is well-connected with trains from different parts of the country. The state bus maintains a good service throughout the state. Taxis, auto-rickshaws are available during any time of the day.